Students of law at Leeds Trinity University gained practical real-world experience preparing them to present cases in tense courtroom environments by taking part in a mooting competition over the course of this term. 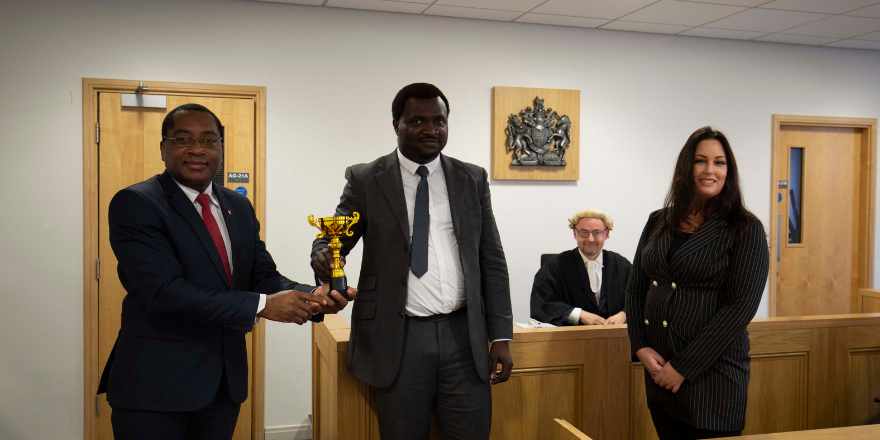 The competition was open to all law students at Leeds Trinity who competed in teams against each other, playing the role of legal counsel in front of a judge.  Each team argued a fictional case as if representing a client with participants analysing a problem, researching the relevant law, preparing written submissions and presenting an oral argument.  The winning team convinced the judge of the superiority of their legal arguments.

This year’s final saw two teams represent opposing sides in a judicial review of a fictional murder conviction.  Presided over by a judge, each team presented their case and gave counter-arguments to advocate on behalf of their respective side. The outcome saw the murder conviction quashed and reduced to manslaughter with the winners prevailing in a closely run contest.

The triumphant team comprised of Mawgain Tugwell and Olatunji Durowoju, both second year law students who were presented with a trophy by the University’s Vice-Chancellor, Professor Charles Egbu.

Mawgain said: “It feels great to win! The first moot I did I was very nervous and I had doubts over whether this was something I could do, but then doing it again I was less nervous having learned from my past experiences.”

Olatunji said: “It was a really good experience. We were very pleased to win the case and have the judge quash the murder conviction and downgrade the charge to one of manslaughter – that was our aim.”

Dr Simon Best, University Teacher in Law, said: "I’d like to congratulate the winners, the runners up and all the students who have taken part in this year’s competition. I thank them for taking on the challenge and investing their time in developing some invaluable skills.”

This is a new annual competition at the University which commenced in January 2022 with law students taking part over a format of three rounds.  The competition was organised with the support of Leeds Trinity's Student Law Society.

The competition was held in the University’s moot court on campus.

Find out more about Law courses at Leeds Trinity University on the website.