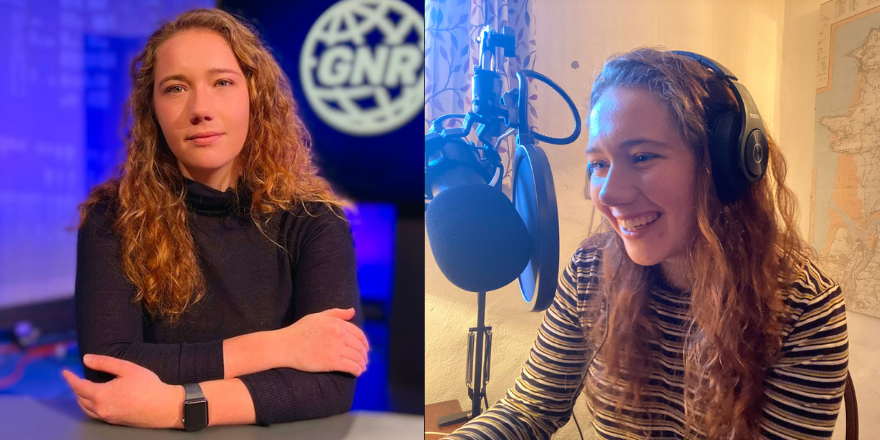 The prize showcases the work of talented student journalists with a passion for creating audio content for radio and podcasts, with the winning features broadcast on BBC Radio 4.

Ella, who is studying an MA in journalism at Leeds Trinity, reached the final eleven nominees alongside peers from universities around the UK.

She attended the annual Charles Parker Day on Friday 8 April where the winners were announced, narrowly missing out on the prize. The judges said all the shortlisted features were excellent, describing Ella’s as “a little gem about kindness and connection”.

Ella’s audio feature Letters from a Stranger tells the story of a project she embarked upon during lockdown when, restricted to her home, she felt compelled to reach out to strangers and communicate about their respective experiences.

Combining her interest in people and their stories with a passion for writing letters, Ella wrote to 30 random addresses to see what came back.  This prompted a chain of correspondence with strangers, some of whom opened up about their own emotions during lockdown and she in turn told them about herself.

The respondents included a holocaust survivor who reflected on the ability of humankind to rise above adversity and highlighted the hope to be found in the response of services such as the NHS to the challenges of the global pandemic.

Ella Bicknell said: “I was absolutely delighted to have been nominated for the Charles Parker Prize. I’ve been listening to Radio 4 since I was eight years old and for my documentary, Letters from a Stranger, to be considered for broadcast on the station is an incredible honour.”

Jenny Kean, Lecturer in Journalism at Leeds Trinity University, said: “This project is a really moving account of people reaching out to one another during lockdown across geography, across the age gap and across different life experiences to make that human connection that we all missed so much when we were shut inside our homes. Ella has created something beautiful and full of hope. She is a truly worthwhile nominee for this prestigious prize.”

The Charles Parker Prize is awarded by the Charles Parker Trust, which preserves and disseminates the legacy of Charles Parker (1919-1980), renowned BBC producer, lecturer, musician, actor, writer, and activist.  It is awarded each year for the best student audio feature. The prize is open to any student at Further or Higher Education establishments throughout the United Kingdom.

Watch Ella introduce her feature and listen to a short excerpt.

Learn more about Leeds Trinity’s Journalism courses on the website.