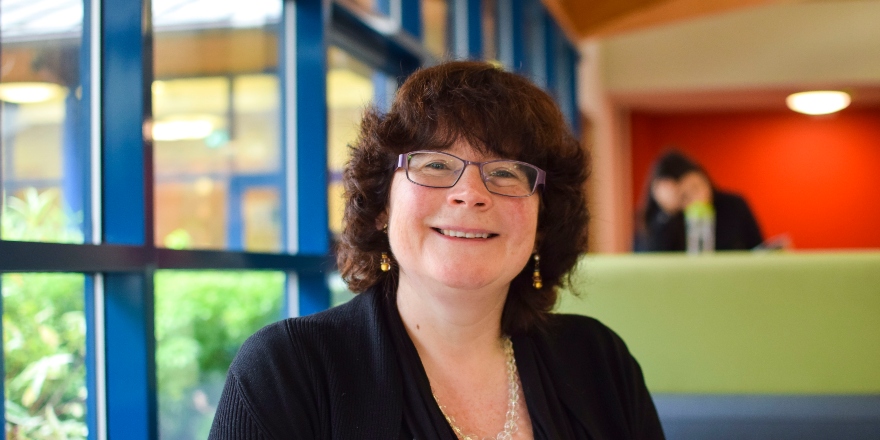 Rev Prof Rosemary Mitchell, a long-time member of the Leeds Centre for Victorian Studies (LCVS), and its Director from 2009-2015, has died of cancer at the age of 54.

Rosemary came to Leeds Trinity as a Lecturer in History in the autumn of 1999, bringing with her a wealth of experience from her six years as an editor at the Oxford Dictionary of National Biography. She stayed at the University for 20 years, progressing to Reader in 2011 and Professor of Victorian Studies in 2016. She remained active with the Centre as Professor Emerita after leaving the University to train for ordination in 2019.

Rosemary was a genuinely interdisciplinary scholar, with research interests spanning high art and low culture, civic buildings and domestic spaces, literature and comics, the sacred and profane, female identities and masculinities. Rosemary’s vast range of interests were showcased in her monograph, Picturing the Past (Oxford University Press, 2000) in which she demonstrated how the Victorians appropriated history in order to address the political, social, religious and cultural issues of their time. This debut was hailed as ‘an important addition to the growing scholarly literature on nineteenth-century popular historiography.’[1] Rosemary’s scholarship was anything but dry. As reviewer Miriam Bernstein commented, the book ‘accomplishes something I would have previously considered impossible: she actually finds a way to say interesting things about W. H. Ainsworth, even unspeakably bad W. H. Ainsworth.’[2] Rosemary continued this research interest in a series of articles – which she was shaping into a monograph – on gender roles and domestic ideology in Victorian historical culture.

What set Rosemary apart as a scholar, however, was the eagerness with which she shared her vast knowledge with her students. At the LCVS, Rosemary taught hundreds of evening-classes for the MA in Victorian Studies, helping freshers adjust to postgraduate studies in her engaging foundation classes on Politics and Society, and then leading them on to more specialist material through her courses on Women and Art in Victorian Society, and Victorian Art and Architecture. She treated her students to an expert fieldtrip around Leeds for the latter. But she could turn her hand to teaching anything and she contributed to team-taught modules on Victorian Childhoods and Victorian Religion: if Rosemary proposed a course, she would usually want to be involved in teaching it too. Rosemary supervised dissertations of all kinds, guiding students in her kindly way, and providing them with endless suggestions for reading and developing their ideas – usually in notes energetically written in her distinctive clear and rounded handwriting.

Rosemary was part of an impressively wide connection of Victorianists, and she could conjure up suggestions for visiting speakers or collaborators instantaneously. This was not a mere matter of professional networking, for she was motivated by a genuine interest in the work of other scholars and by warm engagement with them as people. Rosemary loved to put scholars in touch with one another because she genuinely believed they would enjoy the conversation. As a result, Rosemary made many good connections for the LCVS:  she continued to act as an advisor and entry writer for the Oxford Dictionary of National Biography, advised on the selection of a new input of Victorian artists, and drew colleagues into contributing entries, and as a result, the LCVS hosted the Leeds launch of the Oxford Dictionary of National Biography in 2004. Rosemary served on the Board of the British Association of Victorian Studies, achieving the coup of hosting their annual Conference in 2015, firmly putting Leeds Trinity on the map as a place to host large academic events. She also served on the editorial board of the Journal of Victorian Culture, and developed the Northern Nineteenth-Century Network, running joint events with the University of Huddersfield, University of Hull, University of Leeds and Cergy-Pontoise University in France.

As Director of the Centre, Rosemary initiated the practice of appointing a Visiting Professor each year to give a high-profile public lecture but also a masterclass aimed at postgraduates and early-career researchers. During Rosemary’s Directorship, the Centre hosted Dinah Birch, Peter Mandler, Hilary Fraser, and Regenia Gagnier as Visiting Professors (since 2015, Herbert ‘Chip’ Tucker, Bernard Lightman, Miles Taylor and Ann Heilmann have served in the role). Rosemary developed networks for the LCVS to work with external heritage and cultural bodies, including taking the seminar series ‘on tour’ by hosting talks at local venues such as the Leeds Library. Exercised by the squeezing of Humanities disciplines across British universities, she launched the project Austerities: No Wealth but Life, for which she recruited colleagues and collaborators to engage members of the local community in dialogue about how humanities subjects could address issues such as disability and exclusion, the Occupy Movement, foodbanks, and global poverty. This paved the way for the distinctive focus on equality and social justice that continues in the work of the LCVS to this day.

Rosemary was a great enabler and supporter of other people’s projects. Whatever the idea being proposed, she would listen attentively, nodding vigorously, and somehow by the end of the conversation the project would have taken shape, be it a dissertation or a thesis or a conference or a book. One would go away full of ideas, and Rosemary would often follow up the discussion with a detailed group email to marshal the troops. She would also be the first to offer help, from giving a paper to setting up the refreshments. I always thought of Rosemary as the fairy godmother who could make things happen, and conferences on Victorian Spiritualities, Childhoods, Science and Spiritualism, and even the Annual Virginia Woolf Conference 2016, all benefited from her magic touch.

Of all her achievements, Rosemary took the greatest satisfaction from supervising postgraduate researchers (PhD students). And it wasn’t just a case of giving sound and comprehensive advice on their projects: she really cared about them and wanted to nurture them, building up their confidence to give conference papers, encouraging them to submit publications, inspiring them as teachers, enlisting them in the work of the Centre. Rosemary was a fount of good ideas about what Postgraduate Researchers could be doing to build their CVs, and she drew them into running conferences and writing blog pieces. She even supported a group of Postgraduate Researchers to produce a volume of their own work, Imagining the Victorians (2016, eds. S. Basdeo and L. Padgett), in the Leeds Working Papers series. The support she gave was not limited to her own students either, for she took all the postgraduate researchers within the LCVS under her wing. And her mentorship did not stop at graduation: she was instrumental in creating postdoctoral fellowships within LCVS to support two early-career researchers. Among their achievements was a conference on Victorian objects (2015), that resulted in an edited book Paraphernalia! Victorian Objects (Routledge 2018, eds. H. Kingstone and K. Lister). All of Rosemary’s PhD students became her friends for life, and she is remembered by them with great love and affection.

Besides being an excellent, rigorous scholar, Rosemary had a great sense of humour and was extremely creative. She could lift the mood for colleagues by writing entertaining sketches about government interventions in Higher Education. Latterly, she began performing and publishing poetry, contributing shrewd and perceptive verse to Leeds Trinity’s open mic evening Wordspace, and producing a collection Holding up Half the Sky (Indigo Dreams, 2019) with Hannah Stone. One of her last contributions to the LCVS was a prose poem in the collection An Insubstantial Universe (2020, eds E. Stockdale and A. Alyal) to mark the bicentenary of the birth of George Eliot.

Rosemary left Leeds Trinity in 2019 to answer a long-felt call to Anglican ministry: she trained at St Hild College and was ordained at Ripon Cathedral on 3 July 2021 to serve the parish of Holy Trinity, with St Augustine’s, Draughton. The career change was no surprise to those who knew Rosemary well, for the love, care and compassion that she brought to her work at Leeds Trinity was motivated by her faith. She had founded a staff prayer group and led it for many years, and had given talks on her research to faith groups at retreat houses such as Boarbank Hall and Parcevall Hall, and to the World Council for Christian Meditation group at Leeds Trinity. Victorian religion became an increasingly prominent strand in her research, with studies ranging from Catholic saints such as Catherine of Siena, through to Evangelicals such as Mary Ann Stodart, a writer of conduct books.

And the Victorians sustained Rosemary when she became seriously ill within days of being ordained. She devoured Victorian novels and friends comforted her in her final days with hymns such as Henry Francis Lyte’s ‘Abide with Me’ and J.M. Neale’s translation ‘Jerusalem the Golden’. As a true Victorianist, when Rosemary knew that she had days to live, her only wish was for a good death. Those of us who knew Rosemary can affirm that she had a good death, but many people know that she also lived a very good life. We will miss her dearly, but we were privileged to have known her.

Reverend Professor Jane de Gay is Professor of English Literature at Leeds Trinity University and Co-Director of the Leeds Centre for Victorian Studies.