Leeds Trinity University recently welcomed back more alumni than ever to speak at its annual Journalism and Media Week, reflecting the top talent developed at the institution in recent years. 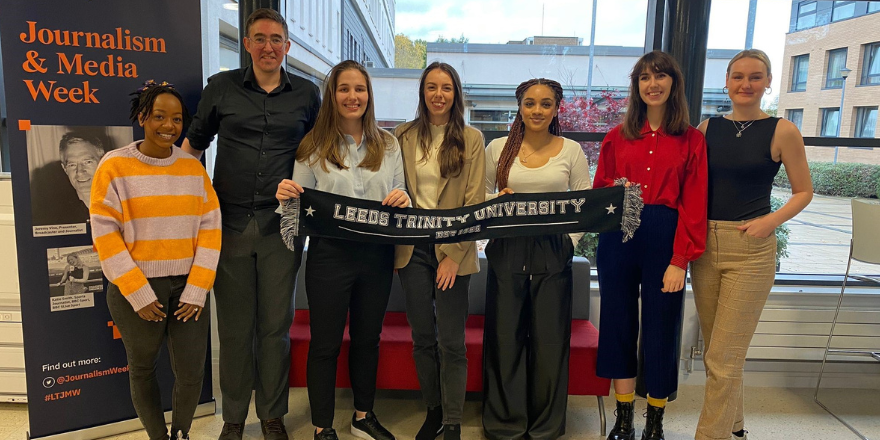 A total of 15 former Journalism and Media students returned in November to discuss their careers since leaving the University and how their courses helped them to secure roles after graduation.

Now in its 14th year, Journalism and Media Week gives students the opportunity to attend talks, workshops, ‘in conversation’ and Q&A sessions with world-renowned broadcasters, journalists and industry leaders who provide an insight into what it’s like to work in today’s journalism and media industry.

Amongst those who spoke about their careers since leaving Leeds Trinity was London Press Club Young Journalist of the Year, Noa Hoffman, who graduated from the dual-accredited MA Journalism course in 2021. Noa now works as a Political Reporter for The Sun and has reported a number of exclusive stories in her first year in the job, including breaking the story about the resignation of former Conservative Party Deputy Chief Whip, Chris Pincher, this summer.

Noa is one of a number of Leeds Trinity alumni who have gone on to work for media outlets all over the UK, including the BBC, talkSport, ITV, Bauer Radio, Global Radio, Times Radio, Newsquest and Reach, and have covered high profile events such as the resignation of former Prime Minister Boris Johnson and the passing of Her Majesty Queen Elizabeth II earlier this year.

Jenny Kean, MA Journalism Course Leader at Leeds Trinity University, said: “We are so proud of our students being at the heart of such momentous events. We’ve all been in newsrooms when big stories have broken and know the adrenaline that kicks in – even at the times of greatest sadness.

“The fact that they are out there doing what we’ve taught them and prepared them to do is fantastic. We really pride ourselves on our record of getting our students into jobs and this just reinforces that. The future of journalism is safe in their hands.”

Erin Carney, who is due to graduate from Leeds Trinity in December with an MA in Journalism, works as an associate producer for Times Radio. She said: “Producing for one of the top political shows for a national radio station from London Bridge during the week there was a new Prime Minister and the passing of Queen Elizabeth II was certainly an experience.

“The buzz of the newsroom was like no other and booking extremely high-profile guests that I am normally used to only seeing on my television was a surreal experience.”

Other newly qualified Leeds Trinity graduates reporting on historic events such as Operation London Bridge include Immy Share, Digital Editor for London at Newsquest; Alice Young, who presents the news for Heart in London; and Ella Bicknell, who was recently recognised with the Broadcast Journalism Training Council’s Steve Harris Award for Excellence in Journalism and Best Radio Feature.

Journalism courses at Leeds Trinity University are currently ranked 5th in the UK for student satisfaction* and the subject has a 100% employment or further study rate amongst its graduates 15 months after graduating**.

For more information about Journalism courses at Leeds Trinity University, visit the website.