Leeds Trinity Broadcast Journalism students have participated in a global broadcasting project in partnership with ten universities across the world to explore different aspects of food. 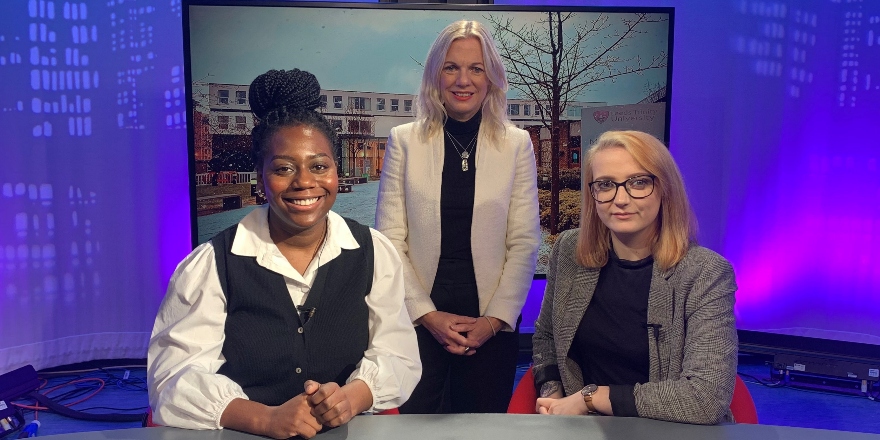 Broadcast Journalism students Abbie Lord and Jael Lutandila, both in their final year at Leeds Trinity, have been involved in co-presenting three programmes as part of a global series of television programmes about food alongside university students in Canada, the Netherlands, the US, China and South Africa.

The series, Food for Thought, featured seven programmes about subjects relating to the topic of food including farming and agriculture, food banks, shortages, trends and nutrition, and was hosted by Ryerson University in Toronto. Leeds Trinity students have co-presented and produced the series with students from Ryerson University, Breda University of Applied Sciences, California State University, Fresno, Hong Kong Baptist University and the University of Johannesburg.

Abbie Lord, final year Broadcast Journalism student at Leeds Trinity University, said: “Taking part in the programme was an experience I won’t forget very soon, I met people from around the world that I’d never have the chance to in any other circumstance. I’ve never really presented before, so I was nervous, but everyone involved was very supportive. I’m really proud of the finished show and I hope I get more chances like this.”

Jael Lutandila, final year Broadcast Journalism student at Leeds Trinity University, said: “This project was very helpful in getting an insight into broadcast journalism. I had the opportunity to host two shows with international universities and learn skills such as reading a script from an autocue, presenting, and communication skills. I would strongly recommend this project to any student as it has been a great experience.”

Katherine Blair, Senior Professional Practice Fellow and Broadcast Journalism Programme Leader at Leeds Trinity University, said: “These international programmes are a great opportunity for students across the world to work together, and to learn from each other’s cultures. It also tests their skills, as they have to work across time zones and cultures to come together to produce some quality television.

“The collaborative projects are an added extra to the University’s curriculum and have set Leeds Trinity students apart from others. These real-world experiences have even contributed to them getting jobs in industry. I’m immensely proud of these collaborations, which provide students with much more than what they learn in the classroom.”

Food for Thought is available to watch online on Ryerson University’s School of Media Youtube channel.

Find out more about our Broadcast Journalism course on our website.