Reader in Psychology at Leeds Trinity University, Dr James Jackson, has had tinnitus since he was a child, and experienced a sudden severe loss of hearing whilst he was a university student. 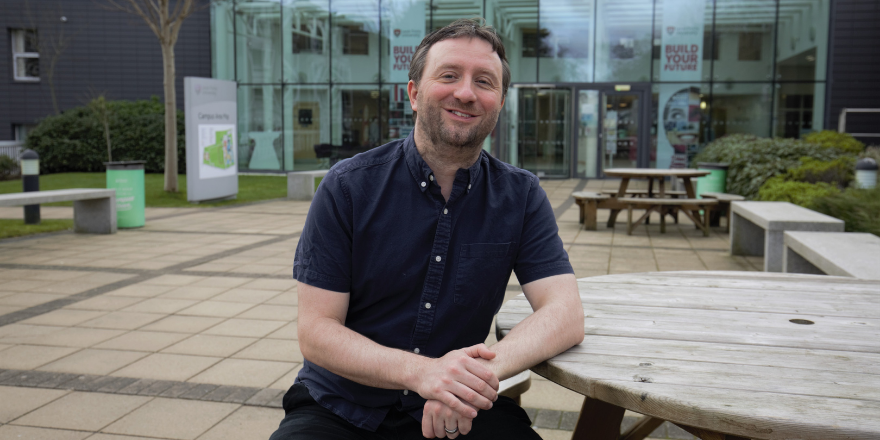 This Tinnitus Week (7-13 February) Dr Jackson hopes to increase understanding of the condition and the distressing psychological impacts it can have, for which he has developed a therapeutic app to help bring people with tinnitus peace of mind.

The 48-year-old academic initially found it very difficult to come to terms with his own diagnosis, and has welcomed Kirsty’s decision to talk publicly about her experiences of living with tinnitus, as part of ITV’s Loose Women panel on 4 February.

Dr Jackson, a Chartered Psychologist and Associate Fellow of the British Psychological Society who has conducted funded research for the British Tinnitus Association, said: “It is so important for well-known individuals such as Kirsty Gallacher to share their stories. In her case, it is doubly important as tinnitus – especially unilateral tinnitus (one ear) – can occasionally be indicative of small, benign tumours. I advise people with tinnitus to go to their GP. There can be many causes, and it is often a symptom of something else.

“Research tells us that 87% of people with tinnitus think about it every day, and 35% every hour. While most people will eventually habituate to their tinnitus, it can be very distressing in the short-to-medium term. Many individuals go on to avoid quiet places, and it can restrict the choices people are willing to make as they go about their lives.”

Kirsty, 46, described to a national audience how she had to step down from presenting GB News breakfast show after medics found a benign tumour in her ear canal resulting in the condition, causing a buzzing in her ear which cannot be treated.

Dr Jackson said: “Tinnitus can be caused by age-related hearing loss, build-up of ear wax, exposure to loud noise, and be a symptom of many other medical conditions. It has significant effects on medical health and wellbeing, resulting in clinical anxiety, depression and insomnia. There is sadly currently no cure.”

Whilst tinnitus has many causes, Dr Jackson believes that modern lifestyle habits and the current Covid-19 pandemic could lead to more people being diagnosed in future.

He said: “If you are playing music through headphones and other people can hear, it’s too loud. In addition, it is now clear that tinnitus severity has worsened for many since the start of the pandemic, and tinnitus is a recognised symptom of long Covid.”

As a Psychologist, Dr Jackson has carried out research around the distress that tinnitus can cause in individuals and the impact that can have on their wellbeing.

Cortisol is a stress hormone – it is also an important part of our move from sleep to wakefulness. Tinnitus distress can disrupt that rhythmic process, resulting in a reduced ability to cope with the demands of the day ahead – including tinnitus – and increasing our vulnerability to clinical depression.

In 2020, Dr Jackson worked as part of an international team to design a virtual coach to support people with tinnitus.

The research team, made up of Dr Jackson and Hearing Power colleagues in Australia, was awarded a $50,000 AUD grant by the Australian’s Global Connection Fund, to conduct research into and develop Tinnibot. The grant was set up to encourage global collaboration between international small and medium-sized enterprises (SMEs) and researchers, to transform research knowledge into market ready products or services.

Tinnibot also supports people with tinnitus by teaching them how to change negative thoughts and increase resilience towards tinnitus through relaxation and meditation, as well as providing access to online counselling with psychologists.

Dr Jackson said: “We are pleased with the initial positive response we have had following the launch of Tinnibot. Over eight weeks of usage, we saw clinically significant reductions in tinnitus distress and anxiety. Like any successful tinnitus intervention, you need the right mix of education, personal goals and resources to help people cope.

“I would like to think that Tinnibot and other well-researched psychological interventions could help Kirsty Gallacher and others like her. While I hope we can find a cure one day, for now, there are ways to come to terms with and live with the condition, without suffering.

“It would be fantastic if Kirsty would try the app to see if it brings her any relief and then feedback her thoughts, in the hope that together we could improve quality of life for people with tinnitus.”

Hearing Power aims to change the global provision of hearing care to enable access to rehabilitation for everyone sooner, cheaper and more efficiently. Find out more about Tinnibot and how the app works on the website.

Dr James Jackson was the main presenter at The Tinnitus and Hearing Information Show (THIS) which took place in Glasgow in 2018. Watch his interview to find out more about tinnitus.

Find out more about Tinnitus Week

Find out more about Psychology courses at Leeds Trinity University, including the Postgraduate MSc Psychology (Conversion).