Journalist of the Year award for alumnus Greg Wright

Journalist and Leeds Trinity alumnus Greg Wright is celebrating after being named Regional and Finance Journalist of the Year by the Society of Editors. 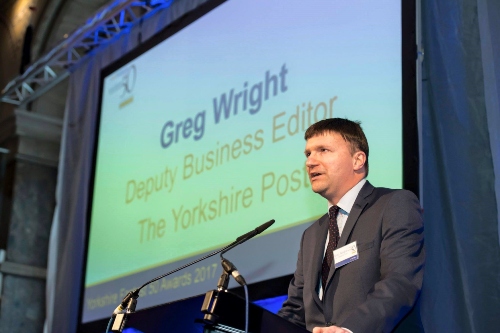 Yorkshire Post Business Editor Greg won the award for his reporting of the HMRC loan charge scandal, including his unrelenting campaigning journalism to suspend the loan charge, which contributed to an independent government review and a promise of amended legislation.

The Society of Editors judges noted the importance of Greg’s journalism, stating his work as "a nationally important story made much stronger by a regional angle, deeply emotional and affecting all sorts of businesses and contractors".

Greg found out he’d won the award on social media as this year, for the first time in its history, the award winners were revealed in a virtual presentation.

"I feel very proud to work for the Yorkshire Post and the award win reflects our long-term commitment to quality, trustworthy journalism," said Greg. "It was certainly one of the highlights of my career to date.

"It's also worth remembering the campaigners who have fought so hard to keep the loan charge in the public spotlight."

Following the campaign and government acceptance of an independent review, the government acknowledged that the loan charge had caused serious distress; demonstrated by the seven reported suicides of people facing the charge, and many who faced life-changing tax bills. Sir Amyas Morse, who conducted the review, praised Greg’s journalism for keeping the loan charge in the public spotlight.

Over the last few months, Greg, and journalists all over the world, have been working away from the newsroom and instead in studies and spare rooms, as they work from home due to the impact of COVID-19.

Greg said: "It's been the hardest time ever for the industry, but I've never felt prouder to work for the Yorkshire Post."

Greg graduated from History and Public Media at Leeds Trinity (or Trinity and All Saints College (TASC) as it was then) in 1990 and received the TASC Award for Outstanding Service to the College Community. He has since won 16 journalism awards and was voted the Yorkshire Society's Media Personality of the Year in 2010. He puts a lot of his success down to the education he received at Leeds Trinity.

"The two attachments I secured as part of my course provided me with the experience I needed to secure my first training contract with Lincolnshire Standard Newspapers," said Greg. "I was involved with the radio station on campus and spent most of my spare time finding work experience to further my career when I completed my studies".

Brett Arnall, Alumni Officer at Leeds Trinity University, said: "I am so pleased for Greg, not just because he is one of our valued and highly engaged alumni members, but with the nature of the award and how much care he shows for the community. In his career Greg has won a number of awards and we are so pleased and fortunate that he continues to support others along the way, especially those connected with Leeds Trinity. He has returned to campus to share his advice during Journalism and Media Week and he's also mentored our Journalism students. There aren’t many better role models for our aspiring journalists."

The Yorkshire Post picked up further awards at the ceremony including: Country's Best Large Daily Newspaper, Supplement of the Year for their Tour de Yorkshire supplement, and Daily Photographer of the Year for Greg’s colleague Simon Hulme.