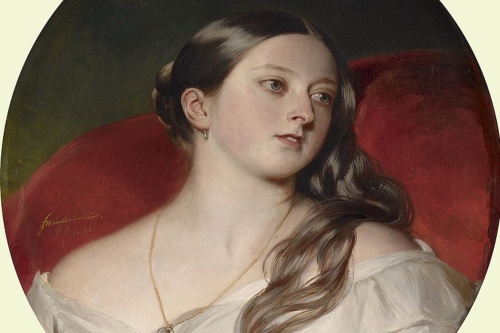 ​​​At the height of her reign, Queen Victoria arguably represented the ideal middle-class woman, her family portraying a picturesque representation of the middle-class family. This was promoted with help from her loyal and dedicated husband Prince Albert and their ever-growing family due to her almost continuous pregnancies. It was also due to Victoria's willingness to portray the domestic middle-class mother and her open acceptance of the views that nineteenth-century women belonged in the home under the authority of their husbands.

However, though Victoria may be remembered for her middle-class icon representation, there were struggles which she faced to arrive at that phase of her reign.  As I explore in my study, 'The Making of a Middle-Class Icon: Public Representation of Queen Victoria 1837-1851', Victoria faced several challenges and public criticisms during her early years as queen as she tried to secure her popularity.

One such challenge was Victoria's relationship with her first Prime Minister Lord Melbourne, and the implications made by onlookers concerning the basis of their relationship. It has been suggested by nineteenth-century newspapers that Victoria and Melbourne shared romantic feelings for one another, though many newspapers conveyed Victoria to be blissfully unaware of Melbourne's implied infatuation with her, making Melbourne out to be an old, ill-intentioned politician and Victoria a naïve, young queen. It was even implied by one particular newspaper that Melbourne had access to Victoria's bedchamber.

1839 saw the Bed Chamber Crisis, an event in which appointed Prime Minister Sir Robert Peel made the request that Victoria change some of her Ladies to show support towards his Tory party. Victoria made it clear to Peel that she would not submit to his request and that she was very fond of her Ladies, who were subsequently all married to men of the Whig persuasion.

Publicly, this caused a divide in opinions, some newspapers such as the Times agreeing that Victoria should be surrounded by her friends and suggesting that it was unjustified of Peel to try to separate a woman from her confidants. There were other public opinions which declared that it was the tradition of Parliament to have the right to request that solid political support be shown within the royal household, and that Victoria's refusal of such a request was foolish. Her refusal also suggested that she was willing to put her own comfort above parliamentary importance.

Furthermore, as discussed in the previous section concerning Melbourne, it could be argued that Victoria was unwilling to accept suggestions or requests from a new Prime Minister, as she had shared such a strong bond with Melbourne.

Lady Flora Hastings was lady-in-waiting to Victoria's mother, the Duchess of Kent. Victoria had an evidently difficult relationship with her mother, and she purposely created distance between herself and her mother once she became queen. It is also worth noting that Victoria loathed her mother's Comptroller, Sir John Conroy, due to his close relationship with her mother and his constant interference with their lives. Once Victoria gained the authority that came with being queen, she removed him from her life and refused to be dictated to by him any further. However, Lady Flora was still present as her mother's lady-in-waiting, and though they had been moved to the other side of the royal grounds, Victoria arguably disliked her mother's approval of Lady Flora and she grew suspicious.

In 1839, Lady Flora's lower stomach became visibly swollen. As it was well known that Victoria had a strong dislike for her, the rumour that she was pregnant began to circulate. Victoria's confidant and advisor, Baroness Lehzen, took it upon herself to inform Victoria of Lady Flora's suspected pregnancy. Furious, Victoria speculated that Sir John Conroy was the father of the child, implying then that Lady Flora lacked purity and integrity as an unmarried woman. The rumour was, however, proven to be inaccurate, as the royal doctor Sir James Clark was commanded to perform an intimate examination of Lady Flora, which concluded that not only was she virginally intact, but she was terminally ill with a liver tumour. She passed away on 5th July 1839.

The whole affair publicly impacted the reputation of the monarchy, some newspapers directing criticism towards Victoria and her Ladies, other newspapers protecting Victoria's reputation by pointing the blame elsewhere. The scandal essentially presented Queen Victoria as unfeeling, showing little empathy towards a woman in a sensitive situation who was clearly being ridiculed and arguably should have been helped, supporting the idea that Victoria had not yet developed to present the traits of a middle-class woman. There was one aspect that all nineteenth-century newspapers agreed on: Lady Flora's undeniable innocence.

Victoria's marriage to her German cousin Prince Albert steered her onto the path of becoming a middle-class icon, and arguably solidified her as a domesticated woman. The marriage was a relief to the men who had expressed concern as to Victoria's somewhat erratic decision making as an unmarried queen. It was thought that securing her with a husband would reassure the public and the monarchy that she was under male influence, as it was considered not only worrying but unusual for a woman to make so many decisions alone, even for a queen.

Another reason that their marriage appealed to the public was due to their mutual adoration for one another, unlike previous arranged marriages within the monarchy which were forced, this suggested marriage was a success due to an almost instant infatuation between the two. They therefore presented a happily married couple on the throne, with Victoria becoming increasingly domesticated and Albert becoming increasingly knowledgeable and relied upon, which not only pleased the public but conveyed the ideal example of a nineteenth-century middle-class marriage.​

Natalie Saunders is a Masters by Research student at Leeds Trinity University.