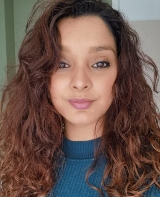 My most memorable experience from being a student is the support and encouragement I received, which helped increase my confidence by validating my knowledge and skills.

I chose to attend Leeds Trinity because it appeared to be a welcoming and supportive institution, which was reflected in the feedback I had received from previous students. My best memories from being a student

My most memorable experience from being a student is the support and encouragement I received, which helped increase my confidence by validating my knowledge and skills. Leeds Trinity was accommodating to my needs of being a lone parent and employed part-time. Working in a related field meant I could directly apply the knowledge I had learnt while studying, which helped me secure a post of Interim Service Lead.

I left Leeds Trinity with more confidence in my ability and a stronger sense of self belief, both professionally and personally. Completing the degree has also enhanced my skills to collect and analyse data and research.

Balancing my career and studies

My involvement with Leeds Mind's first started in 2015, as a service user. I had lost my Dad to suicide in 2008 and struggled to make sense of this. The impact of his suicide caused my world to unravel, I lost my job, left my course and struggled with anxiety.

In 2017, I secured a part-time paid post with the service, supporting people via groups or one-to-one sessions to explore their loss, validate and normalise their feelings. A couple months after starting my degree, I was promoted to a Senior Practitioner, managing staff and ensuring service level targets were met. In my final year, I secured the post of Suicide Bereavement Service Lead, which involves overseeing the development and delivery of support across West Yorkshire for people who have been bereaved by suicide.

At times, it has not been easy to manage the demands of my role and studying but remote working has helped. My course leader at Leeds Trinity and Leeds Mind were extremely supportive which enabled me to carry on with my studies and work. A couple of practical things have helped me stay focused, such as planning my time, creating mind maps, and talking about my struggles or worries. I want to further develop Suicide Bereavement Support for people across West Yorkshire and further highlight the impact that suicide bereavement has on a person. Further on down the line, I want to create services that help families and their communities thrive and develop.

My advice for a student thinking about studying a similar course

My advice is do it! I think sometimes the fear of failing can get in the way. As a working single mother, who struggles with dyslexia, I did not think I could do this. If a friend had not given me the push to call Leeds Trinity and talk through my worries and concerns, I might not have applied. Contacting Leeds Trinity put my mind at ease.