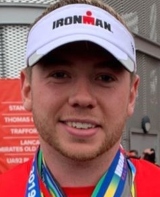 My best memories are centred around the great atmosphere on campus and representing the Rugby League team each year.

Getting more than a degree from Leeds Trinity

Before coming to Leeds Trinity University I was playing professional rugby for Warrington Wolves. After having a shoulder replacement I had to start all over again, so I enrolled at Leeds Trinity. As well as gaining a degree in Sport, Health, Exercise and Nutrition, I met my wife Sarah on campus, during Freshers Week. We got married in 2014.

Aside from this, my best memories are centred around the great atmosphere on campus and representing the Rugby League team each year. The highlight from rugby would be winning the BUCS Shield at West Park Rugby Club. I'm still in touch with many of the players from this era. I undertook a placement at LA fitness in Yeadon as well as one with the Rugby Football League. It was here I was able to support youth teams and specialise in motivating them. Both of these placement opportunities helped me to get in the industry and gain invaluable experience and skills. At the same time I was also working in Trinity Fitness on campus.

Through Leeds Trinity I won a business start-up grant of £2,500. At the same time, in 2010, one of my professional contacts, Jordan Dudley, got me a role at Leeds Rhinos as an apprentice Strength and Conditioning Coach. I developed a big network from here and in parallel I set up my own businesses - Conditioned Training and The Fitness Rooms, Harrogate. I bought in the required equipment and stuck to my business plan. I was gaining incredible experience with the Rhinos, being pitch side at games. Unfortunately the apprenticeship stopped in 2011, as one door closed another one opened. I went to Bradford Bulls as the Assistant First-team Strength and Conditioning coach, but shortly after this the Bulls went bust.

Following on from the Bulls I headed up the Scottish Exiles Programme during the 2013/14 season. I delivered the strength and conditioning training for two years while still having my own businesses.

At the same time as my involvement with the Scottish Exiles I was also going through my Royal Marines training. I received my Green Beret in 2013 and then decided to undertake Officer selection training. I passed the Potential Officers Course (POC) and the Admiralty Interview board (AIB) - a competency-based assessment to find out if you're mentally and physically ready to start Officer selection in The Royal Marines. There are only limited spaces to get a place on 'the batch', but I was successful in doing so. I spent a further 18 months training at Commando Training Centre, Lympstone, the home of The Royal Marines. I became an Officer in The Royal Marines Reserve and at the same time, Sarah and I had our first child, Alfie. Eighteen months later, Sarah was pregnant again with our daughter Isobel. At this point my priorities changed and I wanted to spend time with my young family so I made the very hard decision and put everything into my businesses. I left the Marines because I wanted to spend as much time as possible with my family. But I was really missing the sense of camaraderie, brotherhood and physical training of being in the Marines.

In 2019 after hitting my 30th birthday I wanted to do something meaningful that could support others. So I decided to raise £30,000 for Help the Heroes to mark this milestone. This involved a minimum of two races or events every month including five triathlons, five marathons and an Ironman Triathlon. The races took place all over the world including Paris, Berlin and Sweden. The fundraising concluded with a black tie dinner and auction at Rudding Park, in Harrogate.

If anyone else is thinking about undertaking the type of challenges I did, you need to understand what a big sacrifice you will be making. When I started I was putting too much pressure on myself and started getting too competitive in the events I was taking part in. A few times I felt I was on 'the verge' of falling apart. My strongest advice would be do what you want to do and not what you don't.