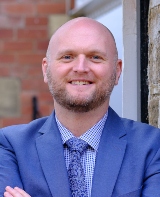 The highly experienced lecturers supported me like they have consistently supported many teachers to forge their careers since 1966.

The draw of Leeds Trinity University

I've always valued the small and homely atmosphere at Leeds Trinity. I've been fortunate to experience this twice as a student and also as sabbatical officer, when I was President during the 1997/8 academic year. I returned to Leeds Trinity to study PGCE English in 2005 as I knew it was a really top course and I would get the 'hands-on' experience with the in-school practices the course offered. The highly experienced lecturers supported me like they have consistently supported many teachers to forge their careers since 1966. Setting up the Rugby League Club at Leeds Trinity

I really enjoyed playing Rugby League at school and was fortunate that my PE teacher, Dom Preston, had played rugby league at professional level. He really motivated me to play at school and inspired me to continue afterwards.

When I was studying my undergraduate at Leeds Trinity, they’d never had a Rugby League team or club, so I established it in 1995. It wasn't just a case of getting a few of the lads together and forming a new team, at the time you could be banned from playing Rugby Union if you played Rugby League.

It's nice that the tradition of the Students versus Old Boys Dave Cole Memorial Shield game continues to take place. This game always gives the opportunity to remember Dave, who was a student at Leeds Trinity from 1997-2000. He sadly passed away from cancer during his final year at Leeds Trinity. Being a Vice Principal

I started working at Fulneck School in 2011 as Vice Principal (Pastoral Care). This role involved being Head of the Faculty of Languages, responsibility for the pastoral care of 11-18 year-olds and line managing all boarding staff and the school nuns. The school fully invested in pastoral care at a time when most other schools were just writing about it.

In September 2021 I became Senior Consultant at Parklands Primary School.

The most satisfaction I get as a teacher Motivation to be a teacher

I really wanted to make a difference to others and have a positive impact on people. My own school days were very underwhelming, and I didn't want others to be faced with a similar experience. I always aim to give a much better experience than I received myself.