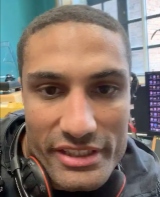 The best three years of my life were spent at Leeds Trinity; it is the best University in the world!

Summing up my Leeds Trinity experience

The best three years of my life were spent at Leeds Trinity; it is the best University in the world! My career since graduation

After graduating, I got a week-long work experience slot at BBC WM and the place was buzzing. There was a call for someone to cover Rover going bust at the Longbridge plant, so I threw my hat into the ring. I love the city and I really cared about what was happening which I think showed. I just got stuck in chatting to people and set up loads of interviews. One week turned into three months, which turned into a year… I was like an old boot that no one could get rid of!

My own show on BBC WM was the first of my ‘pinch me’ moments. This led onto lots of other amazing opportunities.

Since January 2019, I’ve been the weekday mornings travel news reporter on BBC Radio 2 during The Radio 2 Breakfast Show with Zoe Ball and Ken Bruce’s mid-morning show. I also host a variety of my own shows and have covered the Eurovision Song Contest for the station, and I’m a regular presenter on The One Show.

I felt very proud to be part of BBC1’s Platinum Jubilee Coverage of the Party at The Palace. I presented live backstage with the stars in front of over 11 million viewers – a day I’ll never forget.

I won the Royal Television Society (RTS) Award for ‘Best Short Form Presenter’ and ‘Outstanding New Talent’ in 2018. This was for a short film featured on The One Show about homophobia in football, and I decided the time was right to tell my Sunday league football teammates of Coombs Wood FC that I’m gay. Everyone was so supportive and the response was amazing. If it makes even one person feel like it’s going to be ok then it’s worth it.

One career highlight was finding out I was confirmed as a contestant on Strictly Come Dancing 2022 in its 20th series, as part of an all-male dance partnership. It’s a dream come true! In 2020, along with fellow Radio 2 presenters Jo Whiley and Kate Bottley (also a Leeds Trinity graduate), I participated in three triathlons in three days to raise money for Sport Relief as part of their Dare 2 Tri campaign. This raised an incredible £877,000. It was a little bit daunting, but having Jo and Kate by my side, and knowing that the money we were raising along the way would help communities in the UK and around the world, was all the inspiration needed.