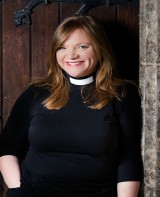 I've been on Channel 4's BAFTA winning Gogglebox and I'm a regular presenter for Songs of Praise.

What Leeds Trinity means to me

Leeds Trinity is where I made lifelong friendships. The rugby girls (although we aren't really girls anymore) still meet together regularly and they are my closest lifelong friends. Leeds Trinity gave me a great academic foundation for my future ministry and although when I left LTU in 1997 I never expected to end up being where I am now, I can see that the skills I gained and the experiences I had gave me a great foundation for the future. The spirituality of my time at Leeds Trinity has also been an enormous blessing and I often draw on those quiet, reflective moments I had alone in the Lady chapel on campus. How I got to where I am now

I got to where I am now mostly by chance! I left Leeds Trinity in 1997 and went into teaching RE at a mainstream state comprehensive in Sheffield, from there I moved on to Head of Department in a similar state school. I took a break from full time paid work to start a family but volunteered at my local church, where we worshipped as a family. From there I began to explore a call to ordination, enough people said they thought it was something I should think about so I decided to take them seriously.

I started at theological college in 2006, studying for my Masters. I was ordained deacon in 2008 and ordained priest the following year. I served my curacy (like being an apprentice) for three years before getting a parish of my own. I worked in 3 parishes and was also an Education Chaplain in a further education college for 5 years. ​

I took part in a wedding flash mob which was posted on Youtube and from there offers of other media work began to come in. I'd always been part of theatre and performance groups and so this seemed like a natural progression. I've been on Channel 4's BAFTA winning Gogglebox and I'm a regular presenter for Songs of Praise. I write for The Guardian, The Independent, The Radio Times and The TES, and I'm a regular broadcaster on Chris Evans' Radio 2 breakfast show.

In 2016 I presented BBC 1's flagship Easter programme 'In the footsteps of Judas' and have appeared on Celebrity Mastermind (I didn't win!) and a documentary series for BBC 2 called 'Alone with the In laws'. When I was no longer a full-time parish priest because of my media work, I became an Asssociate Minister at my local parish church and still officiated weddings, christenings and funerals.

My greatest personal achievement is my fabulous children! But in terms of my professional life after being ordained, winning the 2016 Jerusalem broadcasting award for Pause for Thought was incredibly special.