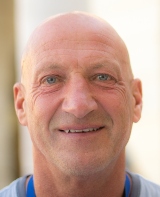 I would summarise my time at Leeds Trinity as an all-round education.

My favourite memories from my time at Leeds Trinity

Sadly (I now think) most of my best memories involved socialising in the bars after various sporting fixtures. At this time beer was still 18p a pint! I made some great friends at Leeds Trinity and nearly 40 years on, I still see many of them at sporting events - although we now pay £5 a pint at many of them! I actively took part in many sports matches and at some point captained the college Rugby and Cricket teams. I was one of the first students to ever work behind the bar and I was Chair of the Bar Committee when the 'posh' and scruffy' bars were redesigned and refurbished by Vaux Brewery. My time at Leeds Trinity

I would summarise my time at Leeds Trinity as an all-round education.

Returning for the 50th anniversary celebrations in 2016

It was really strange to return after all that time, but it brought back some great memories and it was great to catch up with so many old friends. After the celebrations I returned to campus for some guest lecturing sessions. My career after graduating

After graduating, I taught economics in Chester for just over two years. I then left and joined the Lancashire Constabulary, where I served for nearly 30 years. On retiring as a Police Officer, I re-joined the force in a civilian role and eventually became the Restorative Justice Manager. This saw me taking many victims of crime into prisons to meet their offenders.

Restorative justice is a system of criminal justice which focuses on the rehabilitation of offenders through reconciliation with victims and the community at large. Essentially the process can get the victim of crime closure, as they always has lots of questions that are unanswered. The restorative justice process gives that opportunity.

You can listen to a radio interview with me where I speak about restorative justice here and find out how a victim of a burglary got closure after knowing the crime was random and she wasn’t being targeted.