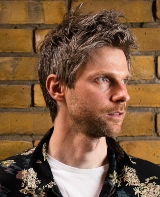 I enjoyed my time at Leeds Trinity. I definitely got support from the lecturers there.

I enjoyed my time at Leeds Trinity. I definitely got support from the lecturers there. Featuring in the Leeds Trinity prospectus after graduating

I’m a drummer, singer, and songwriter, formerly of the Kaiser Chiefs. I attended school locally at St Mary’s Menston before studying Geography and Media at Leeds Trinity University, following in the footsteps of my brother Tim, who graduated from there in 1997.

I left Kaiser Chiefs in 2012 to concentrate on other projects, refocussing my attentions on studio projects. Collaborations since then have included working alongside Mark Ronson, The Vamps, Kodaline, Olly Murs, Lower than Atlantis, Dua Lipa, John Newman, Hurts, Dagny and James Arthur.  I’ve also written for Shirley Bassey and  co-wrote the lead song, Feels Like Summer for the Oscar, Golden Globe and Bafta-nominated film, Shaun the Sheep Movie in 2015.

My solo debut album, Tell Your Friends was launched on Friday 26 January 2018. To celebrate the launch I played at several independent record stores across the UK. I gave Leeds Trinity a few tickets to my album launch gig at Headrow House in Leeds, which they ran as a competition. Returning for the 50th Anniversary celebrations

Tim and I attended The House of Commons in 2016 during the Leeds Trinity 50th anniversary celebrations and we both featured in the Faces of Leeds Trinity exhibition masterminded by fellow alumnus Mark Dolby.