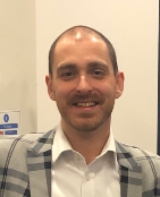 After graduating from my MA I went on to be a Civil Servant, working for the government

Why I chose to study at Leeds Trinity University

It boiled down to the fact it’s a Catholic university. It helped they’d accredit my previous studies as I was training to be a Catholic Priest, which added up to the first year of my BA. I also had a friend already studying, Sophie, who’d be in the same year as me - so that helped nudge me over the line. Leeds is a great city too with lots going on.

My best memories and the skills I left with

I had some really great times at Leeds Trinity, with friends and classmates; work colleagues too! I spent lots of time building up the Catholic Society, working with the chaplaincy and getting involved in things going on in Leeds. I had some great nights out and in whether it was just being lazy in the chaplaincy lounge or at home.

I really enjoyed the practical experiences during my MA filming, interviewing, reading the news to real people on the radio, being published on news websites and giving talks were all really enjoyable experiences. In terms of skills it’s my MA in journalism that drummed in using brief and precise language, working to a word count and a deadline. Using plain language that people will understand was another one! The placements and my work as a journalist refined my existing lack of shyness into a skill for disarming people and building trusted relationships both at work and with stakeholders and partners. I’m very grateful for the practical skills my MA gave me. My Theology BA encouraged me to be thoughtful and see the bigger picture, but in a useful way articulating ideas impact-fully.

After graduating from my MA I went on to be a Civil Servant, working for the government, well the Queen technically, to achieve objectives and manifesto commitments. Civil Servants are entirely politically neutral & have no association with one party or another. I moved around a bit after securing the role. Towards the end of 2018 I acted up as Head of Office to the Director General for Local Government and Public Services in the Ministry of Housing, Communities & Local Government which was incredibly interesting. In February 2019 I started a new role, after being promoted to Senior Executive Officer as Private Secretary to the Commercial Director (this is the equivalent to a Commander in the Royal Navy). Prior to that my job was Private Secretary to the Director of Integration and Communities. Basically I’ve been in high demand for some reason.

I got into the Civil Service by applying for the Civil Service Fast Stream, it’s basically the central Government’s graduate programme. I didn’t actually get onto the scheme but I was a ‘near miss’ and was subsequently offered an Executive Officer job in London. At this time, I’d literally just helped set up ‘That’s York TV’ with another Leeds Trinity Alumnus, Anna.  Whilst I loved the work, the opportunity to go to London for a job with a pension, annual leave, sick pay and a permanent contract was a no brainer! (You’re never too young to think about your pension!)

I love politics and have always found government really interesting, I was always first to volunteer for the politics assignments when working for That’s TV or when studying my MA in Journalism at LTU. So it all seemed sensible really. I must admit, the London living costs soon wiped out the pay rise to Executive Officer... but the two promotions have helped to make things a little more comfortable.

Getting such a prominent job after graduating

It’s great! I like my job a lot. As Head of Office to the Director General, I was involved in: Brexit preparations, I’ve exercised what happens when members of the royal family dies, I’ve been involved in public account committee hearings, designing government strategies and been in rooms with senior members of the government like the current Home Secretary Sajid Javid and current Secretary of State James Brokenshire. It’s given me incredible insight into the way the country is run which my teenage political geek self would never have believed! Walking into rooms with some of the most senior government officials & ministers in the country and not feeling like you snuck in and that you have a role to play is really quite a buzz!

In my experience, you need to be willing to grab opportunities and not let that bit (or a lot) of doubt in the back of your mind stop you. Realistically no one starts a job ready to go, so as long as you’re willing to give it a go, be honest about what you’re good at and what you need developing, you’ll be fine.

You’ve also got to learn quickly where to draw the line between ‘faking it until you make it’ and putting your hands up & admitting you’re out of your depth. I’ve never been shy, I’ve a very ‘northern’ approach to admitting when I haven’t got a clue... but I can usually figure something out or find someone else who can, So in this way I do okay. My attitude has seemed to be appreciated so far by most of my colleagues & managers - most people prefer to skip the bulls***.

Also, I’d advise to be prepared to embrace change. I generally have an idea of what I want to do and where I want to go in the next three years. Beyond that, every time I’ve made a plan it’s not worked out that way so clinging on to it rigidly probably isn’t going to work.

I’ve done quite a bit of recruitment since joining the Civil Service, so with that hat on I’d say: