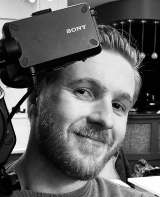 I decided to break free of it for a while and directed a self-funded feature documentary.

Growing up in Bristol, I wanted a fresh start, and with my love for the north, Leeds was perfect. Film Studies was a real passion that I wanted to explore more, take a punt and see where it took me. Getting so much from the course

The course offered a good mix of theory and practical, but it was within the theory that I found a diverse range of modules which took my interest. I traditionally hated studying for anything at school but this course opened up my eyes. I loved studying foreign cinema and how culture was and is represented in film. And at least up until that point, I had no idea just how much religious imagery was in film which got me thinking about the bigger idea of just how much we absorb without real understanding.

There was no grand plan. I applied to hundreds of jobs online with little response but I ended up getting a call back for Sky Studios for their post production runner role in London and after a few rounds, got the gig. After a year seeing how the corporate machine worked, I realised it was the independent production houses where all the fun was at (at least for me) and I started a role as an in-house runner. I met two creative directors and over the years they took me from runner to location assistant to researcher to Assistant Producer to Producer. I’ve been lucky to have worked on different projects from Cbeebies Do You Know to Micky Flanagan’s Sky One series Thinking Aloud and documentary Peeping Behind the Curtain to travelling with Billy Connolly around America twice for two travelogues which are memories that will never fade. When I first took the Cbeebies job, one of my first as a Researcher, I dreaded it but it was the best place for me to learn the fundamentals of filmmaking as I had only studied theory at University. Find out more.

Although it’s too early for highlights, in the middle of all the TV jobs, I decided to break free of it for a while and directed a self-funded feature documentary called Don’t Go Gentle: A Film about IDLES. What I learned from that experience is that if you have an ambition to make something, go make it by any means necessary and you’ll be surprised by just how far you go.

Working as a producer

Having worked in production most of my years in Television I went in to producing, which was a learning experience. Development is much like University in some ways; you get your head into a project, develop it into an idea which turns into a proposition for a film which you pitch and then you let it go for it to be judged by others (commissioners in this case) and see if there is interest. Being freelance working as a Runner, Researcher or AP can leave you with gaps in your calendar year in between jobs and if you can offer your company yourself in a development role, it will be a valuable string to your bow. I learned that a bit late! Having said that, I’m definitely ready to get back on location. For me, it's all about the people you meet filming on the road.

My advice for students

I didn’t have a ‘mentor’ until a fair few years into TV but I would advise writing to filmmakers whose style you love and ask if they’d be up for a coffee/zoom to chat about their journeys into TV and film. The response, when you aren’t looking for a job and simply advice, is often surprising and you never know where it’ll take you. For the film I directed, I got in touch with Christine Franz, a director from Berlin. She’d made a DIY film like the one I was about to make. Her support and advice throughout was invaluable.

And lastly, my focus for a long time was the work. But it is the people you work with who will define your experience on a job, so make sure when you’re getting interviewed or having a coffee with a potential boss, you are also putting the question to yourself ‘would I like to work with this person?'