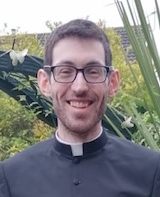 Training to be a Priest

I attended an open day and was impressed by the small and familiar atmosphere that the University gave off and also that fact that the Chapel and Chaplaincy took pride of place on the campus.

I remember getting a copy of the prospectus whilst at college and noticed a section regarding the Chaplaincy and the strong Catholic ethos of Leeds Trinity. After seeing this I attended an open day and was impressed by the small and familiar atmosphere that the University gave off and also that fact that the Chapel and Chaplaincy took pride of place on the campus. My best memories from your student days

I have many fond memories of my time at Leeds Trinity and most of them revolve around the Chaplaincy. I would spend most of my Saturdays out walking with Fr Paul Grogan and other students. We would all pile into the university minibus and head off somewhere in the surrounding countryside and spend the day walking. We also used to put on a number of events with the Chaplaincy such as wii and pizza nights, international food nights and film nights and all these helped us to grow as a community.

Since leaving Leeds Trinity I’ve done a number of different things. Not long after graduating I began working for nPower in Leeds where I worked for several years in a variety of different roles. However, knowing that my calling in life lied elsewhere I began to think about what God wanted for me in the long run.

I began to visit different religious communities as well as attending the diocesan vocations group. I eventually applied for and joined the Order of Friars Preachers (Dominicans). I spent two very happy years with the friars but after further discernment, I felt that God was calling me back to Leeds and calling me to be a Diocesan Priest. So after leaving the Friars I returned to Leeds and was accepted to seminary for the diocese and was sent to study at the Venerable English College in Rome, a place that I had visited on a number of occasions while on the Chaplaincy trips to Rome.

Inspirations to become a Priest

I knew I wanted to be a Priest from an early age as I was preparing to leave school. At this time in my life I was Church of England, but it was during my time at Leeds Trinity that I became a Catholic. I think a number of people have inspired me on my journey including Fr Paul Grogan (pictured with me below). Fr Paul was the chaplain to Leeds Trinity for many years, including during my time as a student. Having a permanent Priest Chaplain onsite was a real blessing. Fr Paul was instrumental both in my conversion to Catholicism and also in helping me with my ongoing discernment. The journey to become a Priest

The seminary training takes roughly seven years. It is made up of four key areas, Academic, Pastoral, Spiritual and Human formation.

My hopes for the future

After completing my STB and STL I will return to the diocese as a Priest. After that I just hope to be the best Priest that I can be.