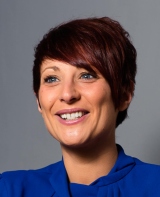 The great thing about the course was that it was 50:50 television and radio. This not only gave great experience but also allowed me to realise where my talents were.

Why I chose Leeds Trinity

I chose Leeds Trinity University after seeing the beautiful campus and knowing the huge reputation of the Media and Journalism course. During my year studying at Leeds Trinity I was totally focused about my training to get the job of my dreams.

What I loved about the course

The great thing about the course was that it was 50:50 television and radio. This not only gave great experience but also allowed me to realise where my talents were. The most favourite aspects for me were making my own news show and being the presenter. I knew then that this is what I really wanted to do. Throughout my training, I always dreamed of working with ITV. I managed to get a foot in the door after being accepted on their trainee scheme while I was still a student. It was the clearest day of my life and I still remember the moment exactly. I was filming a student project when I found out the great news.

I was hosting the event and had been actually talking about how my tutors had prepared me for the industry just before I announced Richard as the winner. It was the first time I'd spoken to Richard in nearly 10 years, it was an emotional experience for both of us. Richard was very instrumental in helping me and everything he taught me really stuck in my mind. I have worked for ITV throughout my professional career. After completing my traineeship in the West Country, I worked with ITV central for four years. From March 2012, I worked for Good Morning Britain. The workplace is a friendly but fast paced environment with a good mixture of news and human interest features.

My work life is very reactive to what is going on around the world. A phone call can come in the middle of the night, often leading to a mixture of emotions. Being asked to cover sad and terrifying experiences such as the Italian earthquake in 2016 or the Manchester bombing in 2017 is not easy, but part of the job.

Then there are the times when I risk my life to report on snow or floods at wherever location in the UK is hit worse. As well as the difficult stories, there are also the bizarre ones. One of her my memorable interview is with a gentleman who turned the front of his house into a vacuum cleaner museum. He could even tell what brand each vacuum was by the sound it made!