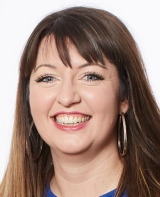 From day one, the course was hands-on and practical. It set the tone for the year that we were professional journalists doing a job, rather than students learning theory.

How Leeds Trinity helped me in my career

From day one, the course was hands-on and practical. It set the tone for the year that we were professional journalists doing a job, rather than students learning theory.

I really valued the emphasis the course had on industry experience. I had placements in newsrooms across Yorkshire, both BBC and commercial. It's great for building up your portfolio, and for making contacts. Many of the people I met that year are fellow colleagues and peers now. When I started the course, I thought I wanted to work somewhere like Radio One, but by the end of the year my love for speaking to real people and getting to the heart of stories in local communities had well and truly been ignited.

I have two – we spent some time with the army on one of their exercises on an army base in the north of England. Our job was to act as journalists in the face of a big incident. It gave us experience, as well as giving soldiers a taste of what it would be like to be interviewed for real.

My second is spending four weeks at BBC Radio 4's Woman's Hour. It was a placement I knew I wanted from day one, and it was all I'd hoped it would be and more! That placement led to paid work in the department, and from there I've never looked back (and I'm fortunate enough to always have been in work!)

Since I graduated, I’ve been lucky to work in various roles across the BBC, including Radio 4’s Woman’s Hour and as a producer for BBC Local Radio’s Mark Forrest Evening Show and Radio 2’s Jeremy Vine Show. I've been part of teams that have won awards for work I was part of – and in 2016 I was named O2 Yorkshire Journalist of the Year. We won a couple of other awards too for one of my ideas, a campaign to celebrate the 100th birthday of a widow who had no surviving family. As a journalist at BBC Radio Sheffield I have presented The Naked Podcast, which involves me and the guests I interview baring all! Jen Eells (my co-presenter) and I decided we wanted to challenge ourselves, and to see if people really did reveal all when they had no clothes on. There was another element to this too. We're both in our thirties and have both got to a point in our lives where we are sick, tired and sad of hearing the funny, fabulous, fearless females in our lives beating themselves up about their bodies. The negative discourse was deafening, and we felt it was time it was silenced.

The reaction to the podcast has been overwhelmingly positive. We've had some beautiful messages from women saying "thank you! I don't feel so alone" to men sharing their own stories, to naturists celebrating the fact we are baring all and celebrating the human body in all its forms. The podcast has been talked about on BBC Radio 2, BBC Radio 4, BBC Radio Scotland, BBC local radios, along with lots of local and national newspapers.

In October 2018 my co-presenter Jenny Eells and I received bronze for Best Presenter in the The Audio & Radio Industry Awards (ARIAS).