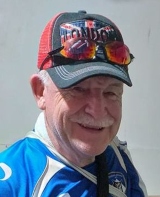 Helping the Filipino community became a reality when I moved there in 2010. From the moment I arrived I dedicated my life to helping the thousands of poor and homeless people in the area.

I came to TASC (as it was known then) as a mature student. One of the most valuable experinces was being able to take advantage of a placement at Radio Aire. After graduating from TASC in 1983, I went on to have a very successful teaching career; starting out as a part-time Lecturer in Drama, in Oldham, before becoming the Head of Drama and Theatre Studies at a top independent school in 1988.

After various other Head of Drama posts, I left the UK in 2008 to work in Singapore, helping to help introduce Drama and Theatre Studies to the area. It was here that I met my wife, who was from the Philippines.  During visits to The Philippines in 2008 and 2009, I noticed the poverty that existed and felt that if I ever moved to the country I would do what I could to help them in some way.

Moving to the Philippines

Helping the Filipino community became a reality when I moved there in 2010. From the moment I arrived I dedicated my life to helping the thousands of poor and homeless people in the area. In my time in the Philippines I have developed a real appreciation of how lives are affected by adverse circumstances. I help as many people as I can on a daily basis by distributing donated clothing, toys, medication, books and basic food. In 2020 it was estimated that I’d helped more than 250,000 people, many of whom I see regularly. The work is unpaid, unfunded and unsponsored but the rewards are from seeing how much the recipients appreciate my efforts. My efforts have attracted interest from many people, including a National TV company who made a documentary about my work which featured me ‘doing my rounds' with the film crew following me round for four days as I went about my charity work.

You can also follow me on Facebook to keep up with my efforts and get involved if you can.