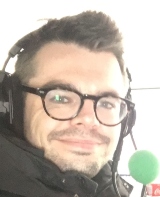 I went on to work at Sky News as Sports Editor, covering the biggest sporting events in the world.

After viewing Leeds Trinity at an open day I decided it was the University for me because of the excellent journalism facilities, the tutors and the fact it’s located in one of the best cities in the world for night life and social activities. My most memorable experiences from my studies

My most memorable moments include doing a 24-hour radio show for Children in Need at Leeds Student Radio, amazing work placements at BBC Leeds, Zoo Magazine and Hallam FM and of course some of the nights out at the Academy on a Wednesday night.

Moving to a new city and living on my own for the first time was a challenge at first, but the chance to meet people during fresher’s week eased the nerves. I made friends for life during those important first few weeks.

How my time at Leeds Trinity prepared me for me career

My time at Leeds Trinity led me into my first job. As someone who had always wanted to be a sport commentator, I came to Leeds Trinity with some experience behind me as I’d already done a few work placements at local radio stations close to where I live. Within a couple of weeks of my course starting, my radio tutor Bob Walmsley recognised my enthusiasm for the subject and put me in touch with the Sports editor at BBC Leeds. It wasn’t long before I was getting paid work as a Broadcast Assistant on the sports shows.

The chance to do student radio, learn about journalism law, court reporting, television filming, television presenting, editing and writing as all helped me get to where I am today.

The hard work paid off though as more regular journalism jobs came up before I was able to concentrate on sports journalism and commentary. I had a role commentating on my local football team Chesterfield, this led to reporting work at Talksport, BBC local radio stations and commentary work for television.

I went on to work at Sky News as Sports Editor, covering the biggest sporting events in the world.

There are many more. My work is a real pleasure and it’s a privilege.