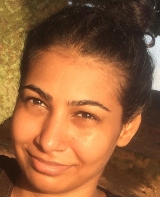 Emotions of people inspire me to make my creations.

I wanted to study in a place which was away from the city life. I was tired with cities and I wanted to escape from the noises, traffic jams and the daily hustle and bustle which tends to make a person feel sometimes like a lost automated machine amongst a million of other machines.

I felt Leeds Trinity was a good option to break away from that pattern of life after seeing a picture of campus in a brochure at a higher education agency office in Colombo. The picture I saw was of a massive building complex standing in a large green field. I guess the ‘green colour’ in that picture attracted me and I started to find out more information about that university and its courses. My favourite memories of being a student

I guess the best part about being a student is that you can make mistakes (you are allowed to make mistakes) and there is a strange ‘freedom’ and ‘knowledge’ that comes with this experience because that ‘freedom’ allows you to grow as a person by learning from your mistakes. So this was what I liked most about being a student. What I loved about ‘student life’ was the independence that you get to do whatever you want with your life, with your time and your energy without any obligations and the feeling of liveliness these experiences install in you.

For my placement, I worked as a journalist in a Sri Lankan national newspaper called Lakbimanews where I wrote news and feature articles. Life after graduating and my career highlights

After I graduated I worked at several Sri Lankan national newspapers as a journalist for a few years. During this time, I published my second poetry collection Paper Planes in 2014 which won the 2015 Sri Lankan State Literary Award for the Best Poetry Collection in English.

In 2015, I left journalism and started studying filmmaking at the Digital Film Academy (DFA) in Sri Lanka. At this time, apart from my studies at DFA I started working on my debut feature film Talking With the Wind. In 2017 I completed Talking With the Wind and it was premiered at the Montreal World Film Festival 2017 under the category “Focusing on World Cinema”. In 2018 the film was screened at a few other film festivals in Asia. After that I started working on my third poetry collection Meraki Sutra which was published in July 2020 and following that I began working on the script of my second film. Inspirations for my poetry

Emotions of people inspire me to make creations. My poetry mainly deals with ‘love’ and ‘loss’ and other human emotions. I do not know whether my writing has been successful or not because it ultimately depends on our measurements of ‘success’ which are subjective.

For me more than winning awards touching people’s hearts matter. I do not know whether my poetry has been able to touch other people’s hearts or not, but it is with that hope that I write…