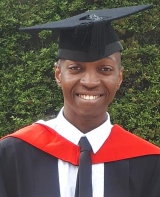 My most memorable experiences were undertaking the professional work placements during my first and second year.

Leeds Trinity University is known for being one of the most well-established and positively received universities in the UK. It also has an incredible determination and reputation in producing highly employable graduates, due to the institution’s professional work placement scheme, which is one of the reasons I chose to study at this remarkable University.

However, the main reason was because it had offered courses in media, specifically within film and television, which drove the ambition I had in spending three years of my time learning the theoretical and practical principles of these entertainment-related mediums, and gain employment in media at the end of the course. My most memorable experiences

My most memorable experiences were undertaking the professional work placements during my first and second year.

I worked with Trinity Vision as part of my Level 4 placement, as the task assigned by the employer was to work in groups of no more than four or five, and produce a 1-minute video for the NHS which advertised the misuse of antibiotics. The experience was overwhelmingly challenging but enjoyable; as part of the group, I had to come up with some visual ideas how to present the advertisement in a fun, educational, and informative manner which will appeal to the intended target audience in the best possible way.

It was difficult to suggest visually appeasing concepts to the group, as I never have done this type of creative thinking before. However, with the invaluable guidance from the employer, he took me through some necessary steps to ensure I would not be stuck for inspiration such as advising me to look on YouTube for pre-existing material. This proved to be the turning point and by the end of the first week of the placement, the group and I decided to base our main character as a male zombie, due to him not finishing his antibiotic course. At the end of six weeks of placement, the result was that the group had successfully filmed, and edited a one-minute video which ended up being exactly the brief stated the advertisement should be - fun, educational, and informative.

Another memorable experience studying at Leeds Trinity was doing my second-year placement with a local business management consultant called Voluntary Action Leeds (VAL). It was a glorious opportunity for me to enhance my video production skills, as the brief was to produce a 1-3 minute promotional video which would persuade businesses to use a new house VAL had constructed for meetings.

The only challenge I had to overcome was to produce the promotional video independently, a challenge I enthusiastically accepted. In tackling this, I constantly liaised with the employer of VAL of the requirements throughout the project whilst reporting to the leader of Trinity Vision of the progress made, who also provided feedback on how I can improve my video production skills to a professional standard. The result after weeks of production and post-production was that the employer was overly impressed with the polished promotional video and used it on the company’s website.

I graduated with a 2:1, a result that I am hugely proud after taking such a massively sophisticated yet exciting course. The best advice for a prospective student would be to give it everything you’ve got; study hard, work hard, make the most friends you can and most importantly, have fun whilst achieving and fulfilling your dreams.