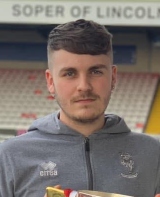 After working in professional football for five years, I moved to McLaren Racing in June 2022, as Senior Motorsport Communications Executive with the Formula One team. I wouldn’t be where I am today without the work placements I experienced during my time with Leeds Trinity University.

I really liked the fact that everything is on one site. The facilities on offer for my course were top class and the fact we got guest speakers for the annual Journalism and Media week really appealed to me. Highlights from my course

I really enjoyed getting creative in different modules such as radio, television and sports writing. This allowed me to get a real feel for working to deadlines and life as someone working in the media before I ventured out to a work placement.

I did placements with a variety of different media outlets but my time with FC Halifax Town and Lincoln City as part of the media teams were two really important stages when it came to my placements. I sourced the pair myself and can honestly say they have played a major part in how I got to my current job.

Placements really helped me prepare for the workplace and ultimately matured me. It was actually the Media Manager at FC Halifax Town who recommended me to the Lincoln City Media Manager where I initially went for a week placement. I was then invited back during pre-season to do some work for Lincoln, this then turned into a job in marketing following their promotion from SkyBet League Two.

After working in professional football for five years, I moved to McLaren Racing in June 2022, as Senior Motorsport Communications Executive with the Formula One team. I wouldn’t be where I am today without the work placements I experienced during my time with Leeds Trinity University. Getting as much experience as possible

Something I did throughout my degree was cover Maltese football as a niche. I was able to travel abroad to Malta to cover a number of football matches and interview international players, some of whom I am still in contact with to this day. This really made my CV stand out and made me different to other candidates.

My advice to others

Make the most of what the University has to offer, but ultimately you need to put yourself out there. Make a name for yourself by getting different experiences at a number of different employers. I spent time at radio stations, newspapers, magazines, football clubs and sports businesses working in different roles to get an understanding of where I wanted to take my career. I found out this was working in sport and here I am today, after working in football I'm now working for the McLaren Formula One Team.

Why I love Leeds Trinity

I #loveLTU because of the experiences I was able to gain both academically and socially. I have made friends and memories for life thanks to Leeds Trinity University.