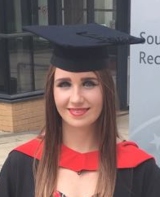 All the lecturers got to know me as a person, not just as somebody they teach and it made my time at Leeds Trinity so much more enjoyable. Studying at Leeds Trinity bought me out of my shell and enabled me to become a much better version of myself.

Why I chose to attend Leeds Trinity University

I knew I wanted to study media, specifically Television Production, at university, but I had no idea where. When I started researching universities, Leeds Trinity kept appearing and I knew then I had to apply. Leeds Trinity stood out to me because of the incredible facilities on offer including a Television Studio, Podcast Studio and state of the art equipment and it is known for being one of the most well-established universities within the UK.

I was also looking for a much smaller university as due to the nature of the course, it was imperative to me that I got as much hands-on experience as possible and dedicated time with my tutor, which Leeds Trinity allowed. When I visited on the Open Day and saw how beautiful and impressive the university was, I knew I had to attend. I studied Television Production and I graduated with a 2:1. I have far too many favourite moments but I would say one of my favourite moments from Leeds Trinity are the modules themselves. They nearly all allow for you to have creative control of your work, my favourite being Advanced Documentary. We were allowed to create a 10 minute documentary on anything we desired, creating the idea, filming, getting contributors and editing. It is still to this day one of my greatest pieces of work. For this module I filmed a documentary about Type 1 Diabetes, in a hospital, which in itself comes with a lot of paperwork, and this was the first real opportunity to experience a location shoot and the challenges faced with this and it was a liberating experience.

As well as this, the lectures made my experience at Leeds Trinity one of the best. I felt they pushed me to my limits to enable me to create outstanding pieces of media and were always on hand to help when things got tough. All the lecturers got to know me as a person, not just as somebody they teach and it made my time at Leeds Trinity so much more enjoyable. Leeds Trinity was one of the only institutions to offer a mandatory placement - none of my friends from other universities had this. This was a huge pull to study at Leeds Trinity as first-hand work experience is invaluable.

For my first-year placement I worked for the in house production company Trinity Vision. For six weeks, we had to be in 9-5, five days a week, which is very different to the University schedule and a shock to the system, therefore it really gave me an insight into the media lifestyle. We created adverts for the NHS as well as learnt many new skills on Adobe Premier Pro, Photoshop and After Effects from some extremely experienced lecturers. This experience was invaluable and some of the things I learnt during this placement, I still use now to this day and find I am teaching others! As every graduate does, once I graduated from Leeds Trinity… I panicked. I wondered how I was going to get a great job within the media when all these other incredible media graduates also wanted a job in the same field. I realised the best way to tackle this was to apply for anything and everything. At the time, I lived in Derby, but wanted to move back to Leeds or to London as I knew that is where the big media giants, BBC, ITV, Channel 4 etc were.

During my time at University, I also ran my own YouTube channel, filming and editing videos in my spare time and what I didn’t know was that my hobby was about to land me my first job within media. As the saying goes, you wait 20 minutes for a bus and then two turn up, I applied for many jobs and ended up receiving an interview for a company called Little Dot Studios in London and one for True North in Leeds within the same week.

My interview at True North was actually thanks to a lecturer, as even though I’d graduated he got in touch to say he knew of a role being advertised and thought I should apply as he knew my strengths. I went to both interviews and got both jobs! I couldn’t believe it and I had no idea how I was going to choose between the two. I went with moving to London and joined Little Dot Studios as part of the ITV team as a Junior Content Editor. I worked on shows such as Good Morning Britain, This Morning and Coronation Street and Emmerdale, clipping videos for the Youtube channels from the live show. I loved it and the experience from running my own YouTube channel, coupled with my knowledge of the industry and experience from University definitely helped me land this job. Six months after starting this job, I applied for a job at ITV to join their social media team on Lorraine and Loose Women, as they were taking their YouTube channels in house and I got the job. I got to work with celebrities such as Giovanna Fletcher and Joe Sugg and Dianne Buswell to create behind the scenes content for Lorraine’s Instagram and YouTube channel. It was incredible to be working with such talented people and be at the forefront of it, in the studio and meetings with production. For this role, I also got to sit in the gallery during the live recording and I was in awe. I had been in Leeds Trinity’s television gallery plenty of times, but sitting in a real gallery, with the hustle and bustle of live TV, is something I’ll never forget and made me realise I really was in the right line of work.

I couldn’t be happier in my current role and it is definitely due to the skills I learnt while studying at Leeds Trinity University. I will never forget seeing my name appear on Loose Women’s and Lorraine’s credits, I sent a screenshot to all of my family and they were so proud. I couldn’t believe that I had actually made it into television just one year after graduating.

Working as a Digital Video Editor

In April 2021 I became the Digital Video Editor across all of ITV, Daytime, Soaps, Entertainment, Sports etc. My main role being to curate and clip content for Coronation Street and Emmerdale’s YouTube channel, as well as working on Lorraine’s Change and Check campaign, creating a bespoke 3 part series about how the campaign has saved people’s lives. For this, I get to create, film and edit the series myself, going on location with the likes of Lorraine and the women whose lives the campaign has saved, to tell their story. This also gets shown on live on air with a back-ref to the YouTube channel, which feels really surreal. The first time I saw a clip of the video I edited live on Lorraine I was in shock. I never imagined a snippet of my work would make it onto live TV and Lorraine Kelly would be talking about it. Don’t be afraid to go for it. Don’t ever think you are not good enough! Studying at Leeds Trinity bought me out of my shell and enabled me to become a much better version of myself. It’s the time you can make mistakes, try new things and see what you like and dislike. Everyone is there to support you and will help you move forward with whichever path you choose to go down.

My advice would be to have a hobby or something to work on alongside your degree. When you are first applying for jobs, it’s great to have some examples of your own work as well as examples from pieces you created at University. For me, this was YouTube, but it could be photography, creating your own short films or running a business social media page. I have found it really helps to have a hobby in the media industry and sets you apart from everybody else especially as the digital world is ever changing.

Apply for anything and everything. Just because you may not seem like the candidate they are looking for, it’s worth a shot, they will probably learn something from you. Gain experience in interviews, see what people within the industry are looking for and then work on those skills. You have to show passion above everything else as the skills they are asking for can most likely be taught.