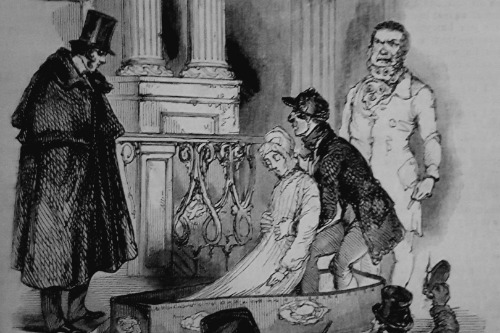 Scholars of Victorian popular literature will be familiar with the name of George William MacArthur Reynolds (1814-1879). He authored the biggest-selling novel of the Victorian era, The Mysteries of London (1844-48), as well as a number of other penny novels. He was also an outspoken radical, unafraid of criticising the monarchy, the lords, and the clergy.

Reynolds' name was, in the words of the conservative Charles Dickens (1812-1870), '[a name] with which no lady's, and no gentleman's, should be associated'.

In academia, Reynolds has enjoyed a resurgence recently. Alongside numerous articles an excellent edited collection of essays upon his life and works by Anne Humpherys and Louis James has recently been published. While his prose works have been studied in great detail, amongst all of the academic essays on Reynolds available, none thus far have examined in great detail the large amount of original poetry that he inserted into his works.

Inserted into his novels, Reynolds' poems draw attention to what he saw as society's social evils. Below is an extract from a song entitled 'The Workhouse Song' that is inserted into The Mysteries of London which emphasises the horror of that Victorian institution:

Stooping over the ample grate,
Where burnt an ounce of fuel,
That cheered not the gloom
Of the workhouse room.
An aged and shivering female sate,
Sipping a pint of gruel:
And as she sopped a morsel of bread
In that liquid thin and poor.
With anguish she shook her aching head,
And thought of the days that were o'er.

In their form, Reynolds' poems resemble the texts of contemporary broadside ballads, which is unsurprising given that Reynolds' sympathies lay with the poor and disenfranchised. In another novel entitled Robert Macaire; or, The French Bandit in England (1839), Reynolds does not hold back:

When despots let their subjects seek for just redress in vain,
The cry will not be stifled by the gibbet nor the chain;
But loud, as if its sounds were borne upon the tempest's wings,
It echoes through the palaces and lofty halls of Kings!

Though nations long may languish in a lethargy profound,
At length the voice of liberty must everywhere resound;-
She, Cadmus-like, has sown the teeth from which an army springs,
To hurl the tyrant from his throne, and crush the sway of Kings.

Combining contemporary concerns about the seemingly ever-rising tide of criminality with radical politics is 'The Lucifer Match', a song in The Mysteries of London which celebrates a criminal burning down the farmhouse of a proud aristocrat:

"The Lucifer-match! the Lucifer-match!
'Tis the weapon for us to wield.
How bonnily burns up rick and thatch.
And the crop just housed from the field
The proud may oppress and the rich distress,
And drive us from their door;-
But they cannot snatch the Lucifer-match
From the hand of the desperate poor.

"The purse proud squire and the tyrant peer
May keep their Game Laws still;
And the very glance of the overseer
May continue to freeze and kill.
The wealthy and great, and the chiefs of the state,
May tyrannise more and more;-
But they cannot snatch the Lucifer-match
From the hand of the desperate poor!"

Some of his poetry, however, is simply playful and intended to liven up a scene, such as 'The Powers of Wine' which is sung in a tavern in Alfred; or, The Adventures of a French Gentleman (1838):

Of wealth and glory monarchs boast –
His mistress charms, the lover sings;
For me the glass of jovial toast
Excel the bliss of swains and Kings.
The flowing bowl,
Inspires the soul,
While boisterous laughter round us rings;
The jest and song,
Our mirth prolong,
And sorrow flies on drooping wings.

Admittedly, this is not 'great' poetry, and I suspect that the following reasons will suffice as an explanation as to why Reynolds has not been recognised as a poet in his own right: in the first instance, he has never been a part of the Victorian canon, rightly or wrongly, and there has never been a multi-volume critical edition of his works published; secondly, his poems are inseparable from his narratives, and usually they always directly relate to the story that he is telling. Hopefully, given the fact that Reynolds' novels are now practically all available in digital format will give scholars a chance to explore his poetry further.