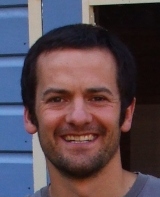 There was a proper sense of belonging to something; I'm not sure that people who go to massive universities get that quite so much.

My fondest memories from my time at Leeds Trinity

Well I met my very wonderful wife there which was definitely a highlight. Other than that I just had a terrific time - meeting loads of brilliant people, exploring Leeds' sophisticated nightlife, working behind the bar for three years. I was also lucky enough to do a sabbatical year, as President of the Students' Union which was a lot of fun. And, actually, I LOVED the food in the canteen as well; perhaps a bit too much in fact... I turned up with a svelte swimmer's physique in September 1998 and went home at Christmas looking like I'd been mainlining gravy for the past four months. What made Leeds Trinity special to me

It had a real community feel to it and everyone was so friendly - staff and students. You could go anywhere on campus or in Leeds and you'd find people you knew. There was a proper sense of belonging to something; I'm not sure that people who go to massive universities get that quite so much.

What stands out from my time as the Students' Union President

Like most Students' Union Presidents, I don't remember a great deal of it! Luckily I had my very good pal Darren Bowen as my Vice President. He did all the hard work so I spent a lot of the time sitting about drinking tea and eating biscuits. We loved the event-organising side of things and we had some great nights over in the Base (which is sadly no more), although it didn't even have a proper bar in those days.

One of our main priorities was to improve the relationship between the Students’ Union and the college management, which had been a little strained at times in the past. By doing this we were able to negotiate an increase the annual subvention and get a bit of extra money for the sports teams. I'd like to think that we helped to lay a bit of the ground work for some closer co-operation between the two parties over the following years.

How my course prepared me for my career

The Primary Education course at Trinity was first-class and prepared me superbly for life in schools. I wasn't quite so keen on getting up at six to catch the bus to Bradford for my placement but it was worth it in the end. As far as the English course was concerned, the lecturers were lovely and there was enough flexibility to allow me to pursue the areas I was really interested in. During my course I did two creative writing modules and a children's literature module, and I wrote my dissertation about children's fiction. Looking back, these experiences were absolutely vital in helping me to become an author.

Becoming an author and my breakthrough

After I left Leeds Trinity I taught for a few years at Lower Wortley Primary in Leeds. I found myself writing poems, stories and plays for the kids in my class (mainly because I was too lazy to search for what I wanted in the library!). Anyhow, I came to a bit of a crossroads in my life and decided to jack it all in and go down to Winchester to study an MA in Writing for Children (this was before Leeds Trinity started offering creative writing courses). It was a bit of a gamble I guess but turned out to be one of the best things I'd ever done. In actual fact, I'd first found out about the MA course from the wonderful Joyce Simpson, who was one of my English lecturers at TASC. She was really supportive of my writing and planted a seed in my brain about the course back in the first year. When I told her I was applying for the MA she really encouraged me to go for it.

From there I wrote for a few years in my spare time (whilst teaching in various places in the UK and Italy) to produce my first book, Socks Are Not Enough, which is about a boy who comes home to find out that his parents are nudists. With a lot of hard work, some very kind interventions from other people and a fair number of rejections, I eventually found a magnificent agent and it was published in 2011. The follow-up, Pants Are Everything, came out in 2013. My third book The Jam Doughnut That Ruined My Life, was released in September 2015. It's all about, well, a jam doughnut that ruins this kid's life - it's not really a clever title...

Socks Are Not Enough won a couple of local awards, including the Leeds Book of the Year, which was fantastic. It's very nice to have your hard work recognised. It's still very weird for me to meet people who've read my books, and even weirder when they tell me they thought they were half-decent. Malorie Blackman and Michael Rosen both told me they'd enjoyed my books, which was pretty awesome. I was nominated for the Roald Dahl Funny Prize a couple of times, although I didn't win. Not that I'm bitter about it now of course...

I do an interactive talk involving wigs, games, a safe and a whole bunch of other stuff. The idea I guess is to entertain the students and get them to think, whilst also putting across my ideas about reading and writing. I don't think anyone would enjoy listening to me drone on about my craft or my tortured soul for an hour so I try to make it as light and enjoyable as possible. Lugging the safe around on the tube isn't exactly fun though. It weighs an absolute tonne!

You can purchase Mark’s book from Amazon and visit his website for more information.