Understanding more about the hearing condition that has no cure

New research by Leeds Trinity University is improving understanding of the hearing condition tinnitus by developing better ways of measuring its effects. 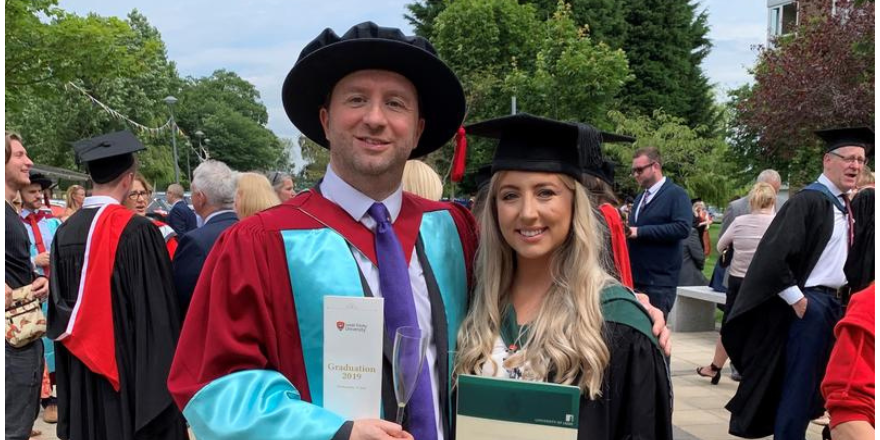 The study was undertaken by Leeds Trinity Postgraduate Research student Holly Edwards, under the supervision of Dr James Jackson, Reader of Psychology at the University. It resulted in a new research paper ‘Neuroticism as a covariate of cognitive task performance in individuals with tinnitus’, which was published in August 2022 and was a significant contributing factor in Holly’s selection for a prestigious place as a trainee Clinical Psychologist.

Symptoms of tinnitus can include hearing ringing, humming or buzzing in the ear, and it has no cure and few clinically adequate treatment options. Tinnitus can interfere with certain cognitive tasks, however findings are not consistent, leading researchers to consider other reasons why some individuals with tinnitus seem to be affected but not others.

Dr Jackson and Holly’s research suggests that individuals higher in neuroticism (which is a personality trait and does not mean neurotic) tend not to do as well with tasks requiring high workload or where they are being judged or measured.  Therefore, some individuals with tinnitus don’t do as well because they are high in neuroticism, not because they have tinnitus.  The findings conclude that tinnitus distress can be measured through use of cognitive tasks, but great care needs to be taken to pick the right tasks, and to ensure a more familiar environment for people being tested.

Holly Edwards studied a BSc (Hons) degree in Psychology at Leeds Trinity before progressing to complete a Masters by Research (MbR) at the University, achieving first class honours in both.  Since then, she has been working as an Assistant Psychologist with the NHS.

Now, thanks to her collective academic achievements and the research with Dr Jackson, Holly is commencing her training as a Clinical Psychologist, starting a doctoral degree at Nottingham Trent University this September.

Dr Jackson, a hearing-aid user and a tinnitus sufferer, first published research in this area in 2014.  It has influenced and informed audiologists, Ear Nose & Throat surgeons, the hearing aid industry, app developers, charities such as the British Tinnitus Association and professional bodies including the British Society of Hearing Aid Audiologists.

Dr Jackson said: “Tinnitus is a common condition, one linked firmly to anxiety, clinical depression and sleep difficulties. Currently, we lack an objective measure of tinnitus distress and can only ask people questions, we cannot test for it. This paper is based upon the work undertaken for Holly’s 30,000-word Masters by Research Thesis.  It goes some way towards a better understanding of the role of cognitive tasks on measuring tinnitus distress. If you can measure tinnitus, then you can measure the effects of tinnitus interventions.”

“I have seen many talented students in my 14 years lecturing at Leeds Trinity, and have had the privilege of supervising research projects for many of them. In that time, I have come across a small handful who have truly shone – intellect, work ethic, pro-activeness, the ability to respond dynamically to constructive feedback, etc.  Holly is one of those individuals, and it was a pleasure to watch her grow academically during her Masters by Research at Leeds Trinity University.”

Holly Edwards said: “My journey began at Leeds Trinity as an undergraduate, where I learnt the foundations of what was needed to follow my passion for a career in psychology.  I went on to complete my Masters by Research (MbR), which gave me the independence to choose my own area of interest under the supervision of Dr James Jackson. The MbR gave me a solid understanding of research methods, instrumental when interviewing for Assistant Psychologist posts and again for the Doctorate in Clinical Psychology.

“Overall, my time at the University was a wholly positive experience. I felt supported throughout and it prepared me for the next step of my career.  Since ending my studies, the support from the University, and particularly James, has continued - something which I am extremely grateful for. James has always been on hand to give advice and has stayed motivated in getting the research published, understanding how this can positively impact the application process of the Doctorate.”

Read the research paper ‘Neuroticism as a covariate of cognitive task performance in individuals with tinnitus’ in full here.

Find more information about Psychology courses at Leeds Trinity University on the website.