Fifty years after their wedding day, Elizabeth and Andrew Lowe returned to the Leeds Trinity University Chapel on Friday 8 July to mark their Golden anniversary with a blessing. 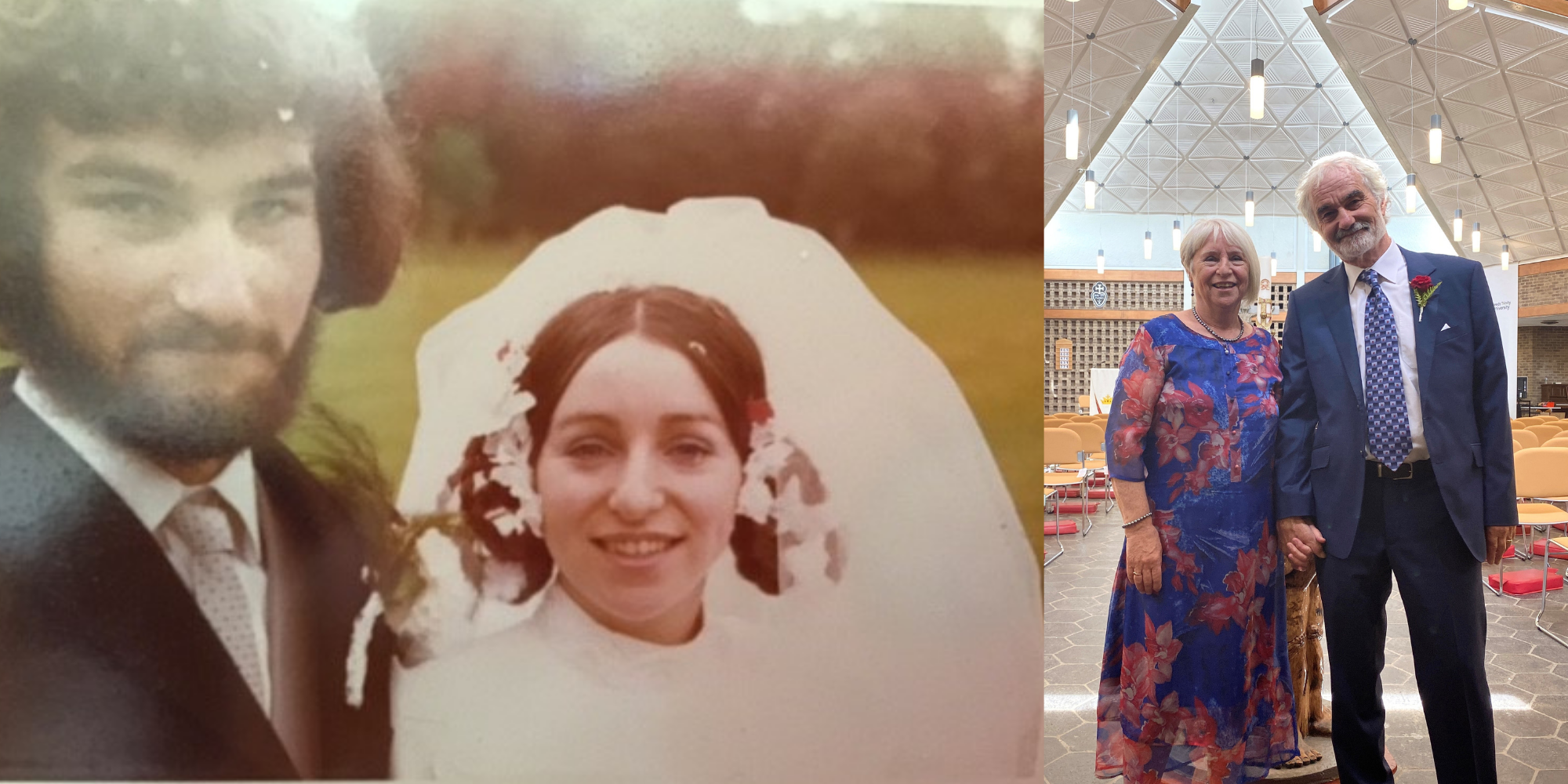 The couple were joined by twelve of their friends, some of whom attended the original wedding, and who studied at the institution in the heart of Horsforth, Leeds.

Now in their seventies, the couple shared memories of how they met in their teens whilst studying at Trinity & All Saints College, as it was known then, between 1969 and 1973. They met on campus, fell in love and decided to celebrate with the life-long friends they knew they had found. They married in the Chapel on 8 July 1972 surrounded by loved ones including Liz’s childhood friend Linda Dixon who studied at a neighbouring university.

As young girls, friends Elizabeth Lowe (Lyons) and Linda Dixon attended an all-girls Catholic school in their home city of Liverpool, before heading to Leeds in 1969 for the start of their adventure in life as students and independent young adults. Linda played the role of chief bridesmaid on the special day and made the dresses for all Liz’s bridesmaids, after not having done any sewing since she was a girl.

Another couple, Edward and Caroline Hayes, also met on campus and married on that very same day. The Lowes and the Hayes pitched together to share the cost of the flowers so both could have the best on their special day, reflecting the community feeling at Leeds Trinity, and name not a number ethos.

Both Liz and Andrew went on to have successful careers in teaching after training and qualifying at Leeds Trinity.

Elizabeth Lowe said: “We were attracted to each other from the start, but during our First Year we had no mutual friends and were seeing other people. It was a friend’s birthday party in February 1971 that shaped our future.

“I was dancing with a young man when suddenly a group of PE (Human Movement) students piled through the door and Andrew stepped in, effectively cutting out my dance partner. This was very unusual behaviour for gentlemanly Andrew, and he later admitted it was rude, but he couldn't afford to 'miss his chance.' We were never apart from that day, except for holidays.”

Explaining the secret of their long and happy marriage, Andrew Lowe said: “Although we would put love and an enduring physical attraction at the top of the list for a happy marriage, there are many other important things like shared values, respect for differences in personality, some shared interests but above these, genuinely valuing your partner's happiness as least as much as your own. All marriages are different since the individuals in them are so. There is no winning formula, no ‘right person’. Luck and being in the right place at the right time can be all it takes. Love and thanks to all at Leeds Trinity.”

Brett Arnall, Alumni Relations Officer at Leeds Trinity University said: “It's stories like this that make my job so special. There are many reasons why our graduates return to campus, but this is the icing on the cake – 50 years to the day since they were married in the Chapel on campus. It epitomises the community spirit at the University and shows how much can be achieved through the academic side of studying but also by making friends (and partners) for life at Leeds Trinity. We all wish Elizabeth and Andrew Lowe and Edward and Caroline Haynes long and happy lives and marriages.”

Dr James Jackson, Reader in Psychology at Leeds Trinity added: “In this digital age, it’s so refreshing to read about Elizabeth and Andrew. If the first time you see someone is ’offline’ and in person, love at first sight can happen within seconds. If requited, that eye gaze lasts much longer, leading to a much stronger, emotional bond between two people. A bond that can stand the length of time.”

With current studies showing a decline in the use of online dating apps, this is a love story that began 50 years ago and has a happy ending.

Read more about the history of Leeds trinity.